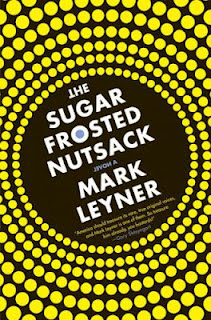 Late last year I was doing my usual check on our American book suppliers website for copies of Mark Leyner's books. I like to keep them in stock, because I think they're pure literary gold. As usual they had one or two copies of My Cousin My Gastroenterologist (his first novel) & a copy of the Tetherballs of Bougainville. Mark Leyner wrote these books back in the 90s along with a couple of other novels, but then stopped writing fiction.
I never suspected to see what I saw that day.
Because on the American suppliers website, in front of my very eyes, was a NEW TITLE by Mark, due to be published at the end of March 2012.
I stared at for a few moments, trying to take this information in. Mark Leyner had written a new novel after a gap of well over a decade. This made me do a small dance. Yes, I danced in the Bookshop at the thought of reading a NEW Mark Leyner book.
It was called The Sugar Frosted Nutsack (why the hell not) and I had to wait 5 months before I could get my hands on it.

So fast forward to March 2012. A parcel arrives from our US book suppliers. I open it.
It was like that scene from Pulp Fiction when John Travolta opens the briefcase, or when Charlie Bucket unwraps his Whipple-Scrumptious Fudgemallow Delight. Because inside the box we're copies of the book I had been waiting to read for 5 months. More dancing ensued.

OK, so now I've read the book. Did I enjoy it?  Did it live up to my expectations (they were very high)?  Has Mark Leyner still got the jazz?

Reading a book by Mark Leyner is an experience. It is inspiring, exhausting, hilarious, dangerous, explosive, filthy, unpredictable and magical.

The Sugar Frosted Nutsack storyline, if there is one, centres around Ike Karton, a plaything of the Gods. There are a lot of Gods in the book. They include El Burbuja, the God of Bubbles, El Brazo, the God of Urology and El Cucho, God of Concussions, Alcoholic Blackouts, Brainwashing & Amnesia amongst other things. El Cucho is also known as XOXO and figures heavily in the book.
These Gods look down from the tallest building on the planet and observe Ike on his stoop, going to a diner, flirting with a waitress, talking to his daughters drug dealing boyfriend and ultimately getting shot.
There, that's the story. That's it. But it isn't about the story, it's about how Mark Leyner plays with it. The book is also about 'The Sugar Frosted Nutsack', an epic book within the book that we are reading, which, when performed (usually by drug-addled blind bards), any variation to the original telling then becomes the official story, which must consequently be performed with those variations. Having been performed thousands (if not millions) of times, the original story and the one that is now performed are completely different. And discussion rages throughout the book about what was the original story and what has been added. With XOXO mischievously mixing things up and changing the story throughout, it is impossible to know what the real story is.
Or are the Gods all figments of Ike's imagination? Is he a deluded madman who believes that fate had put him on earth simply for the purpose of the story?
Everything in the book has been carefully considered. I have no idea where in the book the author started writing. It's almost as though he wrote one sentence and then wrapped that sentence with two more, and on, and on until he had produced a ball of words, which the reader can then slowly unwrap. There are countless repeated passages throughout, which, far from being annoying (unless Leyner does it to be annoying, which he does on purpose at times), hypnotise and take you off on a totally new direction. He playfully experiments with sentence structure, grammar, font, and language throughout and it is certainly not a book I could read quickly. It did my brain in. It poked it and stroked it in a most enjoyable way.
I don't think I can do this book the justice it deserves. Mark Leyner is a genius and I will happily admit that some parts of the book overwhelmed me, such was the surreal ferocity of it. But even when this happened, I let the book take me along on its insane journey, safe in the knowledge that I had no idea what to expect.
If you want to read some more by Mark Leyner, I would suggest, My Cousin My Gastroenterologist. I adored The Sugar Frosted Nutsack and my tired brain has just enough strength left to stand and applaud this freakishly talented author before jumping into this 1966 Triumph Herald convertible and riding off into the sunset. 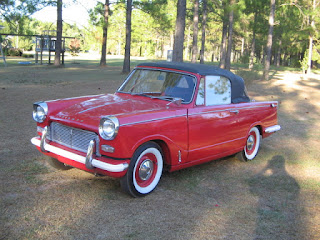 Hello,
I noticed in your earlier post about your bookshelf that Et Tu, Babe was glaringly absent. Perhaps you just had it on the bedside table to peruse again paragraphs about women so thin they were drawn to the TV by static and men who'd had their actual hearts tattooed, or perhaps you don't have it at all, in which case I'd like to donate it.

Hello Johnny,
I know that I once owned Et Tu, Babe. I must have done. I really must have done. But you are quite right, it is nowhere to be seen. I appreciate greatly the fact that not only do you also know the wonder of Mark Leyner, but you are willing to donate a copy of Et Tu, Babe. I don't know what to say. Thanks would be a good start. If you happen to be passing the shop with a copy, then that would be amazing. I will be trying to locate a copy myself now too, so please don't worry too much.
Thanks for the message.

I'll drop it by at the weekend, then!

Thanks Johnny, got the book. Thanks so much.

This is such an awesome blog and fantastic thing I've seen in a LONG time! Love it!