Some of you may remember about 4 years ago, we opened a second shop in Brookmans Park (that's in Hertfordshire).

It was called Tuffet's Toys and Tales and it was a gorgeous kids book and toyshop.

LOOK HOW PRETTY IT WAS. 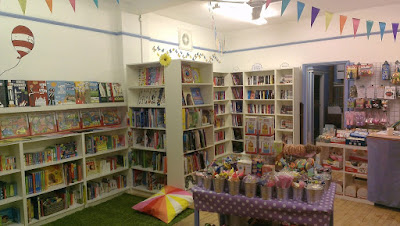 Well, despite our best efforts it simply didn't generate enough customers and we're sadly going to be closing it.

So, we are biting the bullet so that we can focus EVERYTHING on The Big Green Bookshop again.
It's all very sad, as initially we were so excited about the new shop.

It doesn't look quite so pretty now, does it?

We've moved all the stock, and fixtures and fittings into one of those self storage buildings (thanks to @markymarket for helping us do this) and we plan to spend the next 2 weeks going through it all and keeping all the best stuff.
This is a temporary fix, as these storage spaces aren't cheap and we're skint.

So, of course we have the obligatory favour to ask.

Does anyone near Wood Green have any spare garage space that we could borrow for a month or two? It won't be for loads of stuff, just 4 or 5 bookcases and about 20 boxes of books I reckon.

Don't do this to me! I read the headline and almost had a heart attack thinking you meant the bookshop. Sorry to hear about your shop, it did look beautiful.

That's a sad news. Hope you will open a new store soon. Best of luck!

>All Leads are Tested & Verified.
>Invalid info found, will be replaced.
>Serious buyers will be welcome & will give discounts to them.
>Fresh spammed data of USA Credit Bureau
>Good credit Scores, 700 minimum scores.

->Bulk order will be preferable
->Minimum order 25 to 30 leads/fullz
->Hope for the long term business
->You can asked for specific states & zips
->You can demand for samples if you want to test
->Data will be given with in few mins after payment received
->Payment mode BTC, PAYPAL & PERFECT MONEY