It's busy in the shop and Tim and I are fairly happy with the way things are going. The next 11 days are the most important of the year, and we'll be doing all we can to persuade people to come and get their presents at the Big Green Bookshop. We're trying a few things that aren't books this year, like Gruffalo Pencils and Plasters and some brilliant Ladybird mugs, as well as some fab retro Penguin notebooks, and we're also selling some amazing Beano and Dandy giftwrap. 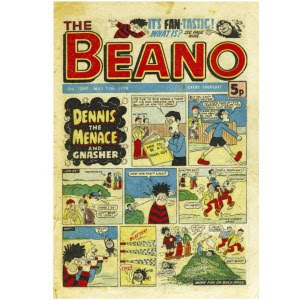 It rained rather heavily on Decmeber 2nd in London. By the look of it, it rained mostly in Brampton Park Road, Wood Green N22 6BG. Our roof is not in very good condition either.
The combination of a busted roof and a massive downpour is not good, and we suddenly found small torrents of water coming through the ceiling. Not good for the CBeebies books unfortunately. Iggle Piggle and Upsy Daisy quickly put on their waterwings and Noc Toc took shelter in a hollowed out tree trunk. Numberjacks 3 and 4 were at sixes and sevens and Mister Maker hurriedly made an umberella from gloopy glue and some paper plates. But it just wasn't enough and we've now got a box of books that are completely wrecked.
Unfortunately it wasn't just the CBeebies books, and another box of lovely books has been waterdamaged too.
Our landlord's a good guy, and he accepts it's his fault, so we'll be taking the appropriate cash off the rent, but it's not eactly what you want to happen in December, or at any time of year for that matter.

Now that the Big Green Bookshop Top 50 has been announced and is proudly on display in the shop, we're putting together new and exciting plans for next year. There's a couple of great ideas which we'll be announcing in january, and we're also (as always) looking to put on some great events.
If any of you out there can help with getting authors to come to the shop, or have any ideas that you reckon might work at the Bookshop called Big Green, please get in touch.

That's it for now. I'll take some choice photos of things in general soon to please your eyes.
Posted by Simon Key at 14:18 5 comments:

Imagine this, if you will.

The new Arctic Monkeys album is released after months of excitement. The music press has been banging on about how brilliant it is and how it would be ridiculous not to get it now that it's finally released.
People queue for hours to get hold of a copy because they want to be the first person to listen to it.
The shop opens and there it is!! The new Arctic Monkeys album...
But hang on a minute, it's not in a usual CD case... no, it's in this slightly thicker plastic case and the box is a bit bigger too. And hang on a minute, it's double the price of a normal CD.
You pick up your copy and you take it up to the person working in the shop.
'Excuse me, but i'm a bit confused', you say, 'I want to buy this, but it's really expensive. Where are the normal CDs?'
'This is all there is' says the person in the shop.
'Is the quality of the album any better?' you ask.
'Not at all. The recording is exactly the same as you'd expect on a normal CD, but the record company decided that they'd put it in a slightly bigger protective box, and sell it to you for twice the amount.'
'but that's crazy' you say. 'why would I want to pay double for something that is pretty much exactly like a normal CD, but it's packaging is sturdier. I don't care about the packaging, I just want to listen to the album'
'Well' says the person in the shop 'the record company will be bringing out a normal packaged CD in about 9-12 months time. All the big record companies are going to start doing this from now on'
'but this is really unfair' you say. 'it just means that normal people who love music can't afford to buy stuff when it gets released. No one will put up with it. It's just a great big con.'
'well' says the person in the record shop 'it seems to work for books'
Posted by Simon Key at 19:42 10 comments: