I was delighted to be able to announce earlier this week that I have a deal with Head of Zeus to publish a book called We’re Asleep Dad, billed as a “collection of parenting tweets from the frontline”, in autumn, with illustrations by the amazing Moose Allain.


It's loosely based on some tweets I've been doing about getting my kids to sleep. Here's the kind of nonsense you can expect to find in the book.

My kids are asleep. I know this because a paper airplane has just smashed against my head & on the wing someone has written "we are asleep".

My kids are asleep. I know this because when I saw them in the kitchen just now, they told me they were sleepwalking.

Thankfully, as I said, the publishers have enlisted the considerable talents of Moose Allain to illustrate these tweets and I honestly could not be happier with the early sketches he's shown me.


OOh, I've just been granted permission to show you an early version of the likely cover. 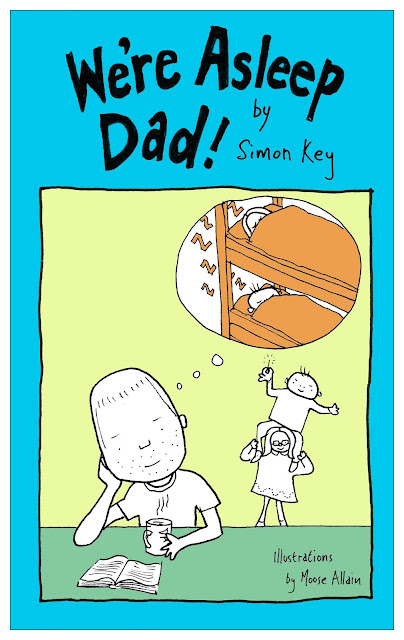 Now then, we thought it would be a fun idea to offer YOU the chance to have one of your "my kids are..." Tweets into the book.

So we're running a competition!

One of the chapters will include a few example of how my kids "help out".
All you need to do is send me a tweet in a similar format to the two above, @biggreenbooks, with the hashtag #mykidsarehelping and then think of something that they could be doing (or not doing)  in 140 characters or less.

The competition ends on Monday 29th May at midnight.

The winner, chosen by myself, Moose and the lovely people at Head of Zeus, will  not only get their tweet in the book, it will also be illustrated by Moose (and of course you'll get name checked).

Also, if you don't already, please do follow Moose on Twitter @MooseAllain (he's one of the best).