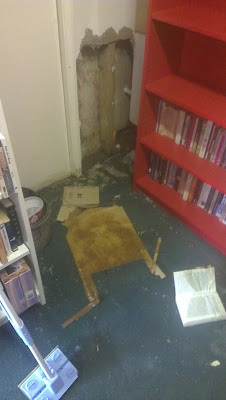 If there is a preacher called Fludd out there who fancies visiting Wood Green any time soon, that'd be great. x﻿
﻿
Posted by Simon Key at 23:10 3 comments:

There's a bit of ground by the side of the shop that we have intended to make better use of since we opened. With the help of volunteers we've cleared the area twice now, with plans to turn it into a reading garden. For one reason or another these plans didn't materialise. 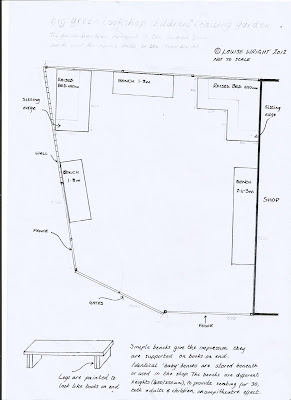 (left click on the picture and it gets bigger)

Here is the plan that our good friend Louise (a garden designer) has put together. She has sourced almost all the materials that we need to make this a reality and is free to help do the work over the next month. There is also Ben and Alyson, who came to our Bookshop Meeting on Saturday who have kindly agreed to manage the project from our end.
Louise is in the process of making the benches to go into garden once the paving has been put down, and we're pretty much ready to get going.
So, as usual, we're looking for some help.
On the 'Schedule of Works', the first thing we need to do is totally clear the area. At the moment it's covered in gravel and other nasty stuff that will require gloves..All this will need to be transported to a gravel pit in Highgate, where we've been told we can dump it.
Once this is done Louise and the team can get going with putting the fence posts in and doing all the clever things that they need to do.
So , if you're free on Saturday 19th May from 11am and want to give us a hand, then please get in touch. Also, if you have a van or a car that you don't mind being used to transport gravel and stuff to Highgate in, please let us know.
It's going to look fantastic and we're keen that it's done as soon as possible so that our customers can make use of it over the Summer.

Wolf Hall by Hilary Mantel (in my opinion) thoroughly deserved to win the 2009 Booker Prize for fiction. It also won the National Book Critics Circle award for Fiction, The Walter Scott Prize for Historical Fiction. It was the winner of the Morning News Tournament of Books, Wimbledon and The Eurovision Song Contest. It was beaten in the semi final of the Champions League by Barcelona after a controversial disallowed goal, which once again brought up the issue of the use of goal line technology.
It is an excellent novel about the early life of Thomas Cromwell and his rise to power in the early 1500s.

Yesterday Fourth Estate published the sequel. This is BIG NEWS in our part of town, so we thought we'd do something appropriate to celebrate.
So we threw a medieval banquet in the bookshop. 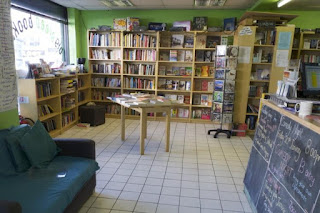 So, we needed to make it look a bit more authentic 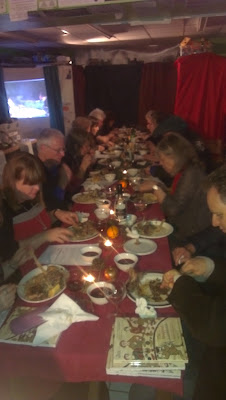 Not bad, eh. (that's a log fire in the top left hand corner).

The food was incredible and supplied by local caterers The Hungry Wolf﻿. There were roasted pigeons with parsley and bread sauce, fish pies with pears and spices, a staggeringly tasty mutton stew apple pies, marchipane, fruit jellies. For the vegetarians we had a mushroom and prune stuffed bread, (which was out of this world) and a borage leaf and parsley egg pie.
This was all washed down with lashings of spiced wine and ale. 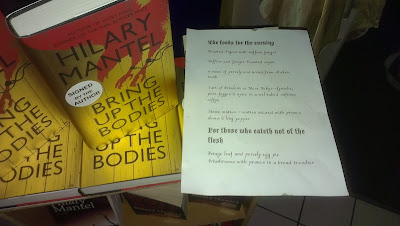 We also managed to secure SIGNED FIRST EDITIONS of the book, which guests got to take home at the end of the evening (all wrapped in brown paper and tied up with string).

We still have some of the Signed First Editions if you're interested.

As usual, we couldn't have pulled this off without the help of our fantastic customers and friends. All the material and cloth that covered the shelves was borrowed, as were the trestle tables which we used to build the long table. The publishers were great in making sure we got the signed copies that we'd asked for and we even managed to borrow the plates from the cafe next door.

So, to sum up, people got together, chatted, laughed, enjoyed a wonderful meal and took home a great book in a pretty little parcel and hopefully had a memorable evening.

Amazon must be quaking in their boots.
﻿
Posted by Simon Key at 13:53 5 comments: