I've just got home from one of the BEST nights in the bookshop ever.

It was an opportunity to tell two of our best friends, Ben & Tara how much we love them.

Tara (@bear_faced_lady on Twitter) and Ben (he's not on Twitter) met  for the first time at the Big Green Bookshop about 4-5 years ago. They became friends. Then one thing led to another and they started snogging etc. Here is a picture of them snogging, in case you don't believe me. 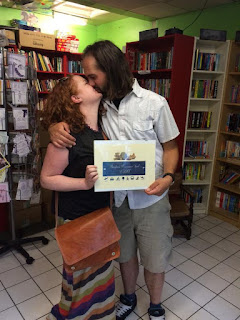 After much snogging, Tara and Ben decided to get married. This wonderful thing happened earlier this year and it was brilliant. They are a most lovely couple.

Right, here's the thing. Ben and Tara didn't have a honeymoon. And we thought that they deserved one....

I got in touch with Tara's best friend, Stef ( @princessofVp) and suggested that we could sneakily try and raise some money so that Tara & Ben could go away for a holiday. Stef was brilliant, set up a Paypal account  and we started to get in touch with  their friends to ask if the could spare a few quid.

Earlier this month we'd  raised enough to think that maybe it was time to tell them. So we organised a meet up in the shop and made sure that Tara and Ben would be there.

After a drink or two, Stef announced to Tara and Ben what the evening was all about.

They had absolutely no idea.
Hee hee.

Then, as expected, everyone cried.


I'd love it if we could raise a bit more money for them too. They talked about going to Madeira. It's somewhere they both always wanted to go.

If you can spare a bit of cash and you know them, or if you have no idea who they are but  just like this story, please donate. Ben and Tara are wonderful people who deserve good things to happen to them.

I hope we can get them to Madeira at the very least. Thanks.

For no reason whatsoever other than fun, we’re having a local Twitter Meet Up (or, as I shudder to call it by it 'official' name a Tweetup) on Thursday July 9th and we’d like to invite you. Come and join us for a drink and meet lots of lovely people off of the internet (oh, and we’ll be there too).

You can drop in any time after 6pm and, depending on how we feel, we’ll probably go to a pub or for something to eat at about 8pm. Hey, but everything is flexible.

We’ll have snacks and drinks, but feel free to bring along something to add to the table.
Posted by Simon Key at 10:58 No comments: