It's the 8th Annual Wood Green International Film Festival between the 25th-28th March. Yes indeed, Wood Green has a film festival. Not just a little piddly one, but a rather splendid International one that filmmakers from all over the world come to showcase their films at.
We got involved last year and as well as sponsoring the award for best local short film, the amazing animation Crone directed by Mikey Please. (click to watch) we also turned the shop into a cinema every evening during the week the festival was on. 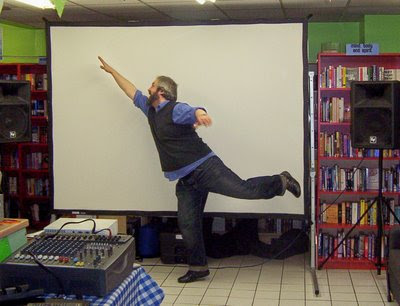 Tim was particularly agile on this day last year.And look at the size of those speakers.

We showed 4 films throughout the week to highlight that the festival was on and to encourage people to go along.
The choice of films was decided by a vote on this very blog (I was very disappointed that 'Metaphoric Enema', the seminal work by enfant terrible film director Vaz Slateman didn't get enough votes to be shown). So we've decided that as it worked so well last year, that we'd do it again. We'll be showing 3 films this year and we'd like you to choose 2 of them. Down the right of this blog you'll see a list of films. we'd like you to vote for the one that you'd like us to show in the bookshop during the week. The most popular 2 will be the ones that we show. Simple ain't it? I've designed it so you can only vote once this time ( I was a bit of a numpty last year....), so make sure that you're sure before you vote. 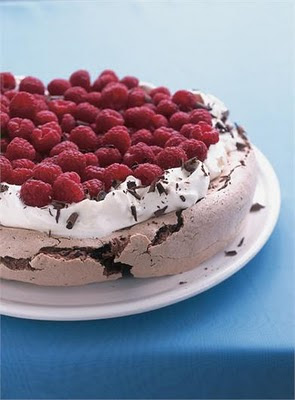 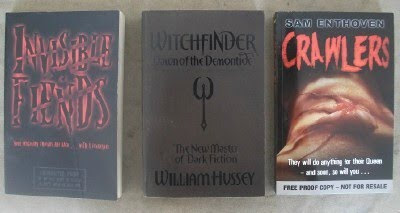 I've been lucky enough recently to have read these three cracking horror titles, aimed at kids. Two have just been published, and one is out in a few weeks time. The copies you see are proofs, and the finished book covers are even better than the ones here.
The First book is Invisible Fiends : Mr Mumbles by Barry Hutchison. Mr Mumbles was Kyle's imaginary friend when he was younger. Ahh, Mr Mumbles, with his floppy hat and coat and his jolly dance.
But Kyle's grown up now and no longer needs Mr Mumbles. But Mr Mumbles is back, and he's not so jolly any more. In fact he has every intention of killing Kyle.... Oh yes, did I mention that Mr Mumbles is called Mr Mumbles because he can't talk. The reason? His mouth is sewn together.
There's an brilliant back story involving Kyle's father, and there's also a kick ass goth sidekick called Ameena. I love the way there always seems to be less than a sliver of hope at the end of each chapter and then somehow...somehow something happens that means you can breathe again. The pace of the the book is furious and the author has clearly left lots of unanswered questions, so that it leaves the reader desparate for the next in the series. Excellent stuff.

The Next book is Witchfinder by William Hussey and is the first in a trilogy that's due to be published over the next year.
OK how's this for an opening gambit. Within the first 4 pages a child has his throat cut and by the time you've just caught your breath someone else (who I thought was going to be a major character) is decapitated.
This is a battle betwen good and evil that's been raging for centuries, and it seems that theres only one person, Jake, who can save earth from the apocalypse that's known simply as Demontide. Previously in order to stop this, a child had to be sacrificed and their blood smeared around the seal of a hidden doorway inside a cave. Jake's not too keen to be that child as i'm sure you'll undersatnd. William's ability to imagine such wild charactrers is praiseworthy indeed. Throughout the book you're never quite sure who's good and who's evil and at any minute you get the feeling someone could sabotage all of Jake's efforts to keep the demons at bay. I don't even want to think about the 'Cabinet'. Once again, the pace is electric and i'm already looking forward to part 2 (out in September).

Thirdly is Crawlers by Sam Enthoven.
Two groups of schoolkids on a trip to the Barbican to see a Shakespeare play are 'interupted' when gross blobs with octopus like tendrils fall from the ceiling of the theatre and start attaching themselves to members of the audience (not audiences members, this is a kids book), giving these creatures complete control over the human it's attached to. These are merely foot soldiers to a monster more deadly and dangerous than you can begin to imagine. Four girls and four boys manage to barricade themselves into a room before the 'crawlers' manage to attach onto them , and from here follows a desparate fight for survival. Throughout this book, which reads like a video game (or PSP game or whatever), there's the cleverly described rivalry between the boys for the well to do rich school and the girls from the less well off comprehensive, and some brilliant twists and turns which means you never quite know what's going to happen next. Why the Barbican? Where are all these creatures from? Is Tim growing his beard again? If you want to know the answers to these questions, apart from the third one, then you'll have to read the book. Which I sincerely hope you will.

So murders, creatures from your worst nighmares, zombies and hideous monsters who will (and maybe do) destroy the planet.
None of these authors are parsimonious in their descriptions of blood and guts nastiness that seems to happen in each of the books, and if parents or teachers are worried about letting their little dears read stuff like this, then I think they should reconsider. The writing is superb, the authors encourage us to use our imaginations and clearly don't underestimate their audience. Kids will be able to relate to the 'heroes' in the books. What teenager would be believable if, after some huge monster had whacked him aroud the face with a piece of wood, said 'ooh fiddlesticks, that smarts'?
I'm really keen that as many kids read as possible, and more than that, that they read because they WANT to read. You have to be extremely talented to be a kids author, and I would suggest that it's harder than ever now, when kids have so many more distractions. These books should have a appeal and will sell really well if bookshops stock 'em.
I don't expect teenagers to be swinging from chandeliers when the latest new book comes out, but it's refreshing and heart warming when you see how excited some of our younger customers get when they come to choose their next read.

And maybe some of you big kids out there might enjoy these books too. I certainly did, and i'm a high court judge.
Posted by Simon Key at 13:40 3 comments:

Scholastic are a big publishing company. Huge. In fact, Scholastic Inc. is the world's largest publisher of children's books.
So you'd have thought that they would know better than to;
Exhibit A. 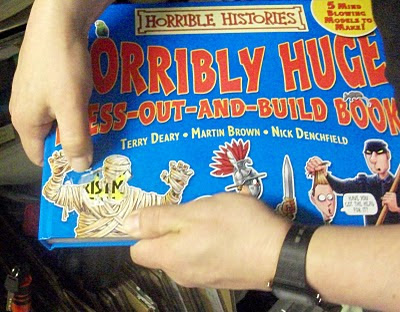 Put a big sticker on their books that says 'Ideal Christmas Present' that is so sticky that you can't get it off without 30 minutes of scrubbing with turpentine and gentle coaxing.
Waterstone's used to have a similar problem with those lovely orange stickers that they like to use. It took a number of top scientists several months to find a gum that was sticky enough to stick onto book covers, but not too sticky that you couldn't get it off. I know, because i've personally stickered and de-stickered tens of thousands of books in the name of marketing. So my advice to Scholastic is to get in touch with the Waterstone's scientists to find out what gum they use.
Exhibit B 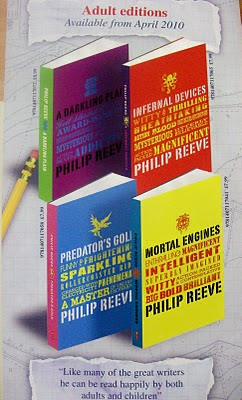 Ah, 'Adult editions'. What this means is that the pulishers think that the book or series in question that was originally written for kids, has enough appeal to adults that they will now try and sell it as an adult book. And heaven forbid an adult would be seen reading a kids book, so they change the cover to look more grown up. Famous examples are Harry Potter, The Curious Incident of the Dog in the Night Time and The Boy in the Striped Jimjams.
Publishers don't mention that the price of a kids book is less than that of an adult book. So if you look really closely at the example above, you will see that the price of these new 'adult editions' will be £7.99. But if you check out the price of the edition that's available at the moment (the kids edition), you'll find it's £6.99. So what's likely to happen is that the price of the kids edition will go up too. Boo. Boo. Boo.

In their defence, Scholastic publish this. 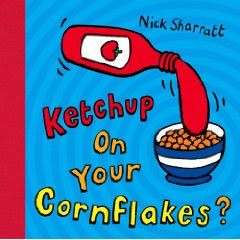 Barry Hutchison will be the topic of my next post, which will be much more positive. Unless he isn't the topic. And then it'll be something else.
Posted by Simon Key at 19:21 1 comment:

We hope you like this idea. I have to admit it was Scott Pack that suggested something like this to me, but i'm prepared to take as much of the credit as I possibly can.
It's so lovely, I almost want to take it to the pictures and buy it some popcorn.

When deciding what to read next, book reviews on blogs are fast becoming a more useful resource than those found in most newspapers. As such, the Big Green Bookshop in cosmopolitan Wood Green has been in touch with some of the most high profile book bloggers out there and asked each of them to recommend a different book each month for our customers. We’ve set no guidelines for their book choices except that they choose a book that they really like. So it could be something old, something new, something borrowed or something blue…steady now.
We’ve had a fantastic response from the bloggers and we really appreciate the time they’ve taken in agreeing to do this. We’re delighted to be introducing this exciting new initiative, which no doubt will be stolen within 6 months.

I’ve listed the bloggers, their blogs and also their book choices here. You can find their reviews on the Big Green Bookshop Website by following this link and also you’ll be able to see a beautiful bookcase in the shop dedicated to this new initiative. 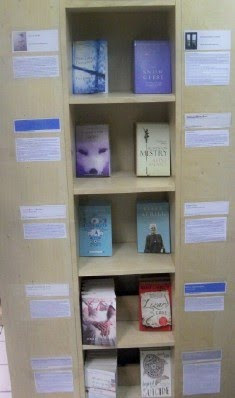 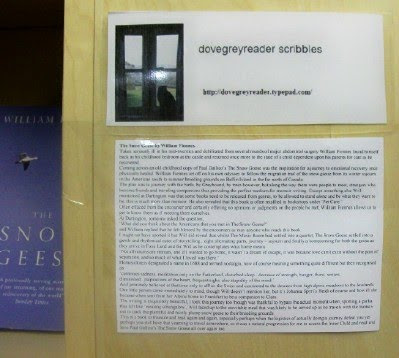 Here is the Dovegreyreader entry. 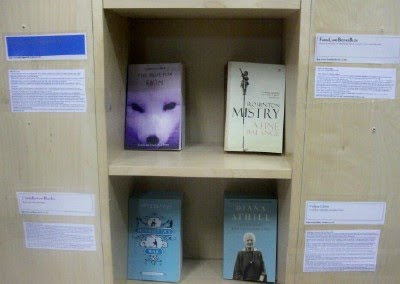 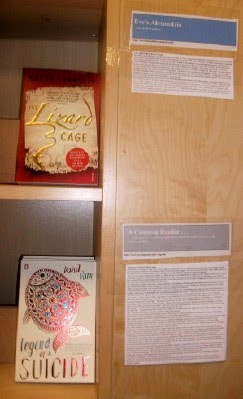 We’re really proud to be associated with these bloggers whose passion for books is plain to see. We’re surprised and delighted already by their varied and interesting book choices and we hope that this will inspire you to try something new.
Look out for a new choice each month. 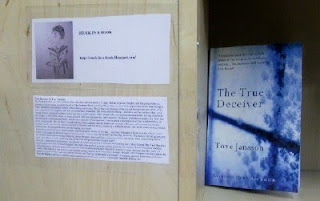 I'll be producing a mighty window tomorrow, which I was going to do today but a class from a local school turned up and bought half of the kids section and then another teacher came in and bought the other half.
Posted by Simon Key at 00:10 5 comments: