OK, this is where we are with things.

We've agreed the terms for the letting of the new premises. We now have to 'contribute' a big wad of cash to the landlords solicitors costs. That's fair enough, we had to do that when we opened the shop in Wood Green.
Once they receive this wad of cash (tomorrow), their solicitors are going to send us the draft lease document.
We probably won't understand most of it, but having not had the greatest of experiences with solicitors during the process of opening the Big Green Bookshop (mark 1), we are slightly wary of solicitors.
So, naturally, we need your help. Serious help.
We are looking for a solicitor who
Not much to ask, eh??

If there is anyone out there who can help, please get in touch.
Twitter @biggreenbooks
Email enquiries at biggreenbookshop dot com
telephone  020 8881 6767
Thanks.

We opened the Big Green Bookshop in March 2008. It is the greatest bookshop in the whole world (well we think so anyway). 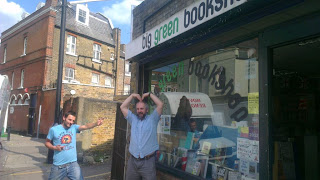 We've had some ups and downs over the last couple of years, but because we have the most incredible customers and friends, we 've managed to get through the hard times.
We've always been a community led shop, and we've tried to be more than just a place where you just come to buy books. With author events, school visits, comedy nights, storytelling, writing, knitting and boardgames groups as well as all the other stuff we do, we hope that there's something that appeals to you. We will continue to do this, because we absolutely love doing it and we believe this is the way that our bookshop should run.

Never ones to tread water, we're always looking for new and exciting things that we can do to share the Big Green Bookshop love. One thing we are hoping to finalise this week, for example, is to get the go ahead to put on a huge literary festival in Wood Green next year. This is something we've wanted to do since we opened, but have never been able to afford. We still can't afford it, but are hoping that we'll be getting some funding...(fingers crossed).

The other thing we've always wanted to do is to open another bookshop. So, just because we can't afford to do this either, we're going to do this too!
A lease became available in a small commercial property near to where Simon now lives in Brookmans Park.
It's a barber's shop at the moment, and it looks something like this.
It's a very different area from Wood Green, but it's crying out for a bookshop. We have managed to negotiate a 'subject to contract' agreement with the owner, with a view to take on the lease on January 1st 2013. But, with a bit of luck and trickery, we'll hopefully be getting the keys on December 1st (13 days time)
We're then going to try and turn it into a bookshop in another 13 days time, and open on Saturday December 14th.
It's going to be a children's bookshop, with a sideline in toys, and Tim and Simon are going to split their time between the two shops. Katie will also be taking on a more permanent role in the Bookshop in Brookmans Park and we'll be taking on one (possibly two) part time members of staff at Wood Green. It will share the same community philosophy as the Wood Green shop and we'll try to offer the residents of Brookmans Park a bookshop they can call their own.

Yes, it's totally crazy, but we are really fired up about this new opportunity.
'Open another Bookshop, What Could Possibly Go Wrong?'

Joe and Me by David Moody. Number 8 of #365biggreenbooks

I am way behind on my book review challenge, but I shall carry on regardless.

Joe and Me by David Moody is a wonderful chapbook published by This is Horror. It's one of a series that they are producing. So far, the quality of this series has been very very high. David Moody is the author of, blimey, at least 9 novels. I guess the best known is Hater. A few of my friends have told me how good he was and after reading Joe and Me, I am totally convinced
Joe and Me tells the story of a couple and their 8 year old boy (Joe). Essentially they are an ordinary family, with the usual day to day issues. However, Joe's mum is a scientist who's working on a vaccine which might just save the planet from total annihalation.
Told from the point of view of Simon, the father, this beautifully paced story cleverly looks at the challenge faced in juggling normal family life when one of the parents is forced to spend time away from the family (trying to save the world).
And when the government take away the funding and threaten to use the research for less noble means, things take an even more sinister turn.
But can the family survive against all the odds?
I love that it was told from the point of view of Simon, the father, who seems the least potent of the 3 members of the family.
I loved loved loved this little chapbook. In less than 50 pages, you have a fully formed story and a great introduction to the literary talents of a wonderful author. It's a gem. Horrific, emotional, and beautifully written. Yes, it's horrific.
I give it 8, and that's a big old 8.
I shall be reading more David Moody very soon.