'And it's Shakespeare to take the final Penalty...'

Since the start of the World Cup a couple of weeks ago it’s been hard to walk down any street without seeing a flag or two flying. A bit like this one here: 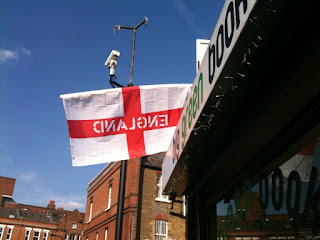 And they haven’t just been England flags either, but that’s beside the point: Football is a stimulator of national pride. If England had lost today, pub and armchair commentators would have had much to say, but still every fan would have been there to watch and cheer when England played again. Of course, England have now made it to the next stage of this World Cup, so phew! and Hurrah! etc, but what else can we be proud of as a nation? Here I turn over to the inspiration for this entry, P.D. James who celebrates her 90th Birthday this year:

I have no idea if P.D. James is a football fan and there’s no disrespect intended here but Shakespeare is only the start. Now let’s see who else can we send out on to the pitch to represent the best of English Literature. First choice is obvious Shakespeare (Team Captain,) E.M. Forster, (Goal) Charles Dickens (Left Wing or Striker) Jane Austen (I don’t know any more positions,) Samuel Johnson, T.S. Eliot, Charlotte Bronte, Jonathan Coe, Sarah Waters, Ted Hughes, and finally D.H. Lawrence.

These are my choices and now I turn it over to you our loyal readers – anyone you think I’ve missed out or should be relegated to the subs bench? Do let us know. Speaking of Loyalty, don’t forget that our new Loyalty Card launches this Saturday – do read Tim’s entry below for more information.

So true, funny how it seems. Always in time, but never in line for dreams. Head over..... Ahem, sorry got distracted there.

We have been gone from the blogging world for a while. Simon & Mark have been tweeting or twittering, or hooting like deranged owls or something. But now we are back with a Loyalty Card. (loyalty cards are so much nicer than vengeance)

Since we opened the Big Green Bookshop, we've been overwhelmed by the support and help that's been offered by people who understood the importance of having a decent bookshop in Wood Green. Many of our customers we now consider friends and we'd like to say thanks for your continued support.

Which is why, on Saturday June 26th we're having a day of unmitigated fun and we're introducing The Big Green Bookshop Loyalty Card.

The Card works on a points system, so for every £5 you spend in the bookshop you'll get a point. These points will give you money off books you buy in the future. It's all quite simple, and the card is available to everyone.

We want to make it a special event, so on Saturday 26th we're having the big launch. The first 50 customers to pick up the Card will be entitled to double points on their first purchase and also they'll get at least one chocolate hobnob.

Cardholders will also be able to take advantage of special offers that we'll be offering throughout the year, so it's well worth picking one up.

So please come along on Saturday, it'll be lovely to see you.

Saturday the 26th is also my birthday, and I am going to my cousins’ wedding. So unfortunately I won’t be there. But if anyone wants to bring me some cake I am sure that Simon and Mark will save it for my return. Oh yes. 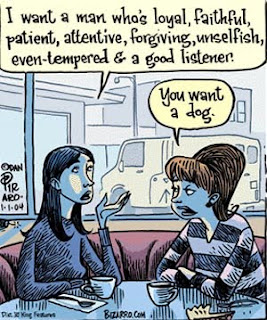