Name the New Bookshop - The Result


We ran a competition asking people to come up with names for our new bookshop/toyshop in Brookmans Park. The winner getting £50 to spend in the new shop and also having the privilege of cutting the ribbon on the opening day.
We had around 300 entries (292 to be exact), and last night was the night we chose the winner.

This is a blogpost all about what happened.
Are you ready to read it?
Good.

I put all the names that had been entered onto a spreadsheet. This spreadsheet was sent to 6 trustworthy and honest people who were asked to mark the ones they liked.
From the information I got back, I was able to put together six separate sh... ohh blah blah blah.

I went to the pub with Tim. Also with us was Helen Wright, a reporter from the Welwyn and Hatfield Times.
﻿﻿

I was drinking Grolsch, Tim was drinking Adnams and Helen was drinking Coke with lots and lots of ice.
From the 300 odd suggestions we had got it down to about 70 by the time we'd finished our first pint.
It was important to be brutal in these early rounds.
Names that had fallen by the wayside included;

We then moved on to round 2.
Spreadsheets featuring popular and not so popular choices were scrutinised.
We each went through the less popular lists and chose names we thought were worthy of further contemplation. Toys and Tales got through to the later rounds, despite only getting two votes from the six people who chose. Also, I was very fond of The Cave of Wonders, so that was pushed through to the later stages.
I should mention at this point that there were six names that were always going to make the finals. These had been chosen by pretty much everyone we asked as worthy of consideration.
These names were;

We had worked our way through another pint now and another swathe of names had been discarded.
﻿﻿
Including;

So we got to the final few.

I'd been tweeting a few things throughout the evening and here was a massive online support for The Little Green Bookshop.


Tim and I had to decide whether this was the right thing to do. It was a BIG decision. We discussed what would happen if we opened a third or a fourth shop. Would we call it the Medium Sized Green Bookshop, or the Gargantuan Green Bookshop? We decided that it had to go.

We were down to six.

This was tricky now. So I put on my magic hat.
There were too many Brooks and Books. And we also had still got a big soft spot for "Toys and Tales", even though it didn't make it through to the finals.


Crossings out and more booze left us with the final three names. 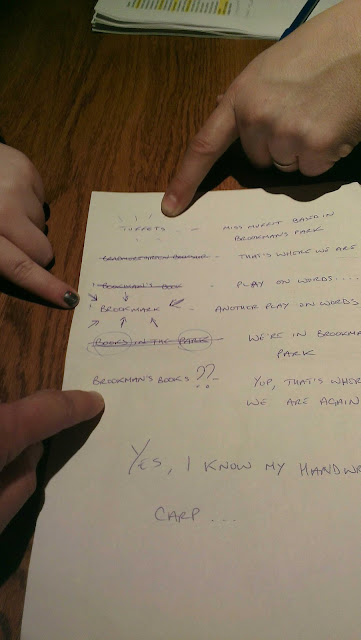 What a huge decision.
When we named the Big Green Bookshop, Tim inserted 3 pens into his face. Let's relive that magic.

﻿
OK.
Here we go.
THE RESULT
Remember that we all liked "Toys and Tales"? This made a big difference.

Our new shop will be called;

I know! It was a real outsider.It kept sneaking through each of the rounds. But here we are. We loved Toys and Tales, but never thought it had the full boof to be a name on its own.
But Tuffets gave it the full boof.
Let us know what you think.
x
﻿
Posted by Simon Key at 02:12 3 comments:

Here is some stuff about the Literary Festival that we've been awarded £10,000 to put on.

2. The theme of the Literary Festival is "London; a Celebration".


Once we get some of the money, we can really start work on the Festival, but now that we have a theme, we can start to put together some ideas.

Here's a few ideas we've come up with (and we're just spitballin' here):
Anyway, those are a few ideas.

Now, we need your ideas.

Tonight at the Bookshop, we're holding the launch party for Black Feathers, the spellbinding new novel by Joseph D'Lacey.
I am very excitied about this book.
Those of you with good memories will know that I first met Joseph when he became the first author to visit the Big Green Bookshop. He turned up 15 days before we even opened!
His first published novel, Meat, is a truly staggering book, leading horror legend Stephen King to state "Joseph D'Lacey rocks!", and Joseph followed this up with the equally dark Garbage Man and Kill Crew (sadly no longer available). 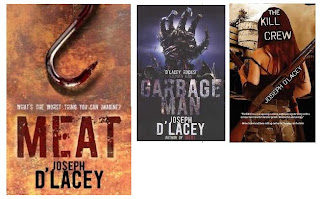 Since then, his career has been something of a rollercoaster. He got picked up by a US publisher and also one in Australia to publish a couple of novellas, but then his publisher in the UK went bust. It was a dark time for Joseph and it can't have been easy at all.
It was at this time that I approached him and told him that I wanted to publish his next book myself. And that's what happened. Splinters, a collection of the best of Joseph's short stories from the last 12 years was published last November, by Timeline Books (my publishing company).

﻿
It's something that I am very very proud of and hopefully it's introduced some new readers to Joseph's extraordinary prose.
In the meantime two more of Joseph's books were published (SnakeEyes and Blood Fugue). 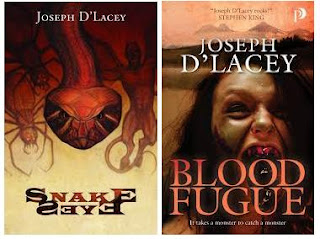 And now, here we are. The launch of Black Feathers.

Black Feathers is a beautiful combination of folklore, fairytale and dark apocalyptic fiction. Set over two very different time periods, one modern day, the other generations into the future, it follows the journeys of Gordon and Megan. Although there are hundred of years separating them, both are searching for the elusive Crowman. Some say he will bring destruction to the world, others say he is the planet's saviour, but all Gordon and Megan know is that they must find him.

It is surely the most accomplished of Joseph's novels to date (and I've read them all). If you haven't read his stuff before, this would be a wonderful introduction.
I'd be so pleased if you could come along tonight to help us celebrate with Joseph. He has been one of our biggest supporters and he deserves huge huge success.
There'll be wine and an exclusive short film too. And, of course, there'll be Joseph. One of my favourite authors of all time.
Posted by Simon Key at 10:55 No comments: