I spent last Friday flyering/leafleting a particlar area near the shop.
It's known as 'The Ladder' and it's rather a large area.

View Larger Map
I started at 9.30am and I walked for 8 hours, dropping off about 1,800 leaflets through about 1,800 doors. The things you do eh?
If you've ever done anything like this you'll have some idea of what to expect. My fingers were almost taken off by 2 dogs(terriers probably) who threw themselves at the door the moment I pushed the letter flap. And I was also confronted by the dilemma of 'Is what i'm about to put through your letterbox junk mail or not?'

I personally don't think it's junk, however the dictionary definition is;

flyer
n.
a sheet of paper with an advertisement on it, given to you in the street or pushed through your door

so clearly it is. And as an upstanding citizen I abided by the rules. I was, however intrigued by the myriad of signs prohibiting me from pushing my little leaflet through the door. 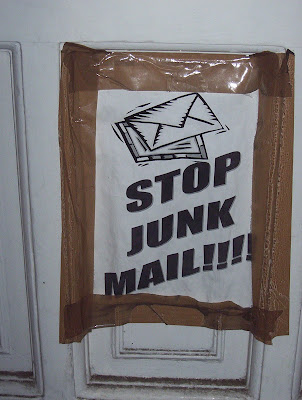 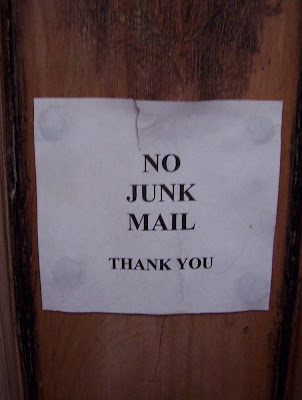 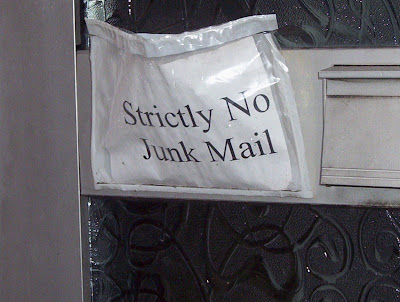 The majority of these made the front doors look very ugly.

My favourites were these

Engraved letterboxes. This is a lot of effort, and congratulations to the owners of the 17 houses on the ladder who invested in these.

I must tell you more about 'the ladder', and none of this is true.
The shop is in a borough of London called Haringey. Within this borough is a small area called Harringay and this is where the ladder is(actually this is true). Now Harringay was renamed in the late 90's by 12 of the residents who were in a secret society. They wanted to pass on information on the internet to each other which no-one else would have access to, so they persuaded the council to change the name of this particular area, so they could do this. They plan on becoming a principality and have introduced the 'Harringay Pound', a currency which is only accepted in the shops in the area. We aren't in Harringay, but as a kind of go-between, we are one of the few shops that accept this money, and we re-use it in one of the many boutiques that adorns Harringay's glorious streets.
As I said, none of this is true, and if you want to know what's really going on in Harringay, then may I suggest you join the lovely forum/info point/sounding board Harringayonline. It's very good indeed, and quite informative aswell. Most of the time.
I have a real soft spot for the ladder and it's a cracking place to live. There were (far too) many houses that I jealously looked at and wished I was living there as my frozen fingers pushed a Big Green Bookshop flyer through the front door. All except this one 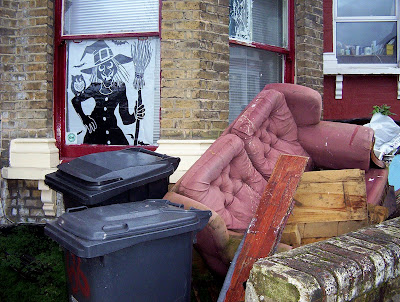 oh my god i've still not beenin to pick up flyers for my street - I'm so sorry!!!! I WILL make it this week maybe Thursday afternoon or if all else fails Saturday! sorry! I feel awful about it :)

I feel your pain! I once had to hand out flyers on a high street with a paper bag over my head (I'm struggling to remember what the promotion was - I think I've blocked it out).

Thanks for the nice comments about HOL. Everything you say about Harringay is of course true and you forgot to mention that we are thinking of re introducing the Turnpike at Turnpike lane to raise revenue for the Harringay street festival tentatively planned for next year. Harringay pounds and euros accepted.
Got your flyer and have tucked it away for safety.

p.s. Hope you'll be doing the gardens next. They are Harringay too.

Hooray for the Ladder! Interesting history there. And as you so rightly point out, a rich diversity of flora and fauna to be found in the various porches and front gardens too. I didn't get a flyer, but then I'm over on the Tottenham side of it. - Sarah