As London and some of the big cities around the UK get pounded by rioters, I thought it would be useful to update you on what's happening in Wood Green.
The shops that got clobbered on Sunday morning are mostly open again now. However some of the worst affected, like HMV are 'closed until further notice' according to the signs. 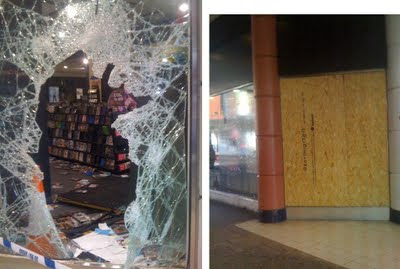 HMV on Sunday and again this morning
The Body Shop spent all of yesterday cleaning up and doesn't look like it'll be open for a few days.

Body Shop on Sunday and again this morning
Last night there were a few idiots causing mischief on the High Road. It seems that this time they were more intent on smashing things rather than nicking stuff. Stones were thrown from the balconies in Sky City (a block of flats above the shopping centre) and windows of the shops below were smashed. I remember a few years ago having eggs thrown at me from here. That was funny. This is not. 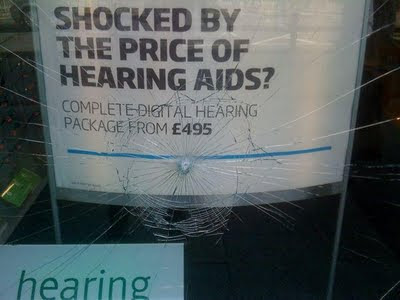 Shocked? I'm appalled.
We have opened as normal. We held our Knitting Group on Sunday and we did our songs and stroytelling to under 5's on Monday morning. We're trying not ot let the situation affect us, but you cannot help but notice the strange atmosphere. Rumours flew around all day yesterday. According to various sources throughout the day I heard rumours that gangs were heading to Wood Green on about eight different occasions. Thankfully none of these rumours were true but at 4.00pm (after the trouble started in Mare Street in Hackney), a number of the shops on the High Street suddenly closed. The owner of the cafe next door to us came in and told us that he'd had a call from his friend up the road in Palmer's Green say there was trouble on the way and that he was closing. Then a rumour that trouble was brewing in Green Lanes just south of Wood Green. I then got a phone call from a friend in the Council telling me that all the shops on the High Road were being closed, although the police were stressing there was no trouble.
When we got a call from my daughter's nursery up the road, telling us that they were closing early and I should come and pick her up, we decided it was time to close.
All these rumours make it very difficult to carry on like normal and, as a precaution, we have cancelled our Book Group discussion tonight. Having 15-20 of our customers leaving the bookshop after dark while there's so much tension in the air seems like an unneccessary risk. We hope this is the only thing we'll have to cancel as the events and groups define the bookshop (in normal circumstances this would be the time where I link you all to the events page on our website).

I suspect this atmosphere will remain for a while, but it's a testament to the communities that have been affected that they have all rallied round to help clean up the areas affected. If you're on twitter, please check out @riotcleanup as they seem to be coordinating things very well.

Thanks for your messages of support They really do mean a lot.

I am glad to hear that you are all okay and have managed, as far as possible, to carry on as normal. I was a student up the road in Palmers Green twenty years ago and have visited the WG area many times since. I have a fondness for that part of North London and was very shocked and saddened to see the wanton destruction caused over the weekend.
That you continue to provide creative and cultural activity, and a place of peace in amongst all this is a wonderful thing. Long may it continue, and I hope that I can visit your shop when I am next in London.
Take care and best wishes to all. D

According to The Grauniad's map, your windows were smashed on Sunday night. I assume from the fact that you don't mention this that it isn't true. (Actually, don't you have shutters anyway?)

Just wanted to wish you, and those around you, all the very best.

It was heartening to see all of the people in various areas getting together to help clean up today. But the damage - to property, livelihoods, psyche - is appalling. We've had our own versions of this in the US over the years, but this event seemed to be particularly inflamed by the rise of social media. I followed Twitter which was chock full of reports, rumours, rascist comments, jokes, etc. As for the Blackberry IM service, it's too bad that they didn't voluntarily shut it down (if they were afraid of repercussions, they could have just accidentally "crashed" it) for 24 hours.

My heart breaks for those whose businesses have been ruined and the people now without jobs as well. I'm glad your shop sounds OK so far and will provide an oasis of calm among the tumult. Stay safe.

I was up all night watching the Beebs with tears in my eyes. Bastards think they're entitled to free stuff and respect without ever having done anything to earn it.
Take care and stay safe!

Really upset at the goings on, had 6 great years in hornsey & south tottenham, still got mates just off wood green high St and are regular visitors. Keep your chin up, stay safe and look after each other. I really don't have any other or better words than this. All our love from the North East

Simon, I too am glad to learn that you are OK. I was with my cricket club on Saturday and didn't learn the full extent of the damage until during Sunday.

Yes, there seems to have been a legitimste cause for anger from Mark Duggan's friends and family, but this was completely hi-jacked by people who wanted nothing more than an excuse to destroy and plunder. They've been copied by other groups in various parts of London, and now in other cities and large towns. Where were the parents of the younger perpetrators?

Sorry for the rant. Keep up your good work and all good wishes to you all.

Glad you are OK. I was out of town. There is no excuse but I feel that this may make people realise that our society's emphasis on the material is having an ugly effect on some people who have no other ethical or moral codes to live by. The BGB is a small light in a dark commercial world. Go well adn safely.

That 'anonymous' comment (two, in fact, above) was from Adrian. I'm just working out how to do all this blogging stuff. Anyway, you know who I am now. -- A